Mimi Kim is the founder of Creative Interventions and co-founder of INCITE! She has been a long-time activist, advocate and researcher challenging gender-based violence at its intersection with state violence and creating community accountability, transformative justice and other community-based alternatives to criminalization. As a second generation Korean American, she locates her political work in global solidarity with feminist anti-imperialist struggles, seeking not only the end of oppression but of the creation of liberation here and now. Mimi is also an Associate Professor of social work at California State University, Long Beach. Her recent publications include “The Carceral Creep: Gender-Based Violence, Race, and the Expansion of the Punitive State, 1973-1983” (2019) and “From Carceral Feminism to Transformative Justice: Women of Color Feminism and Alternatives to Incarceration” (2018). She is currently co-Editor-in-Chief of Affilia, a critical feminist social work journal. 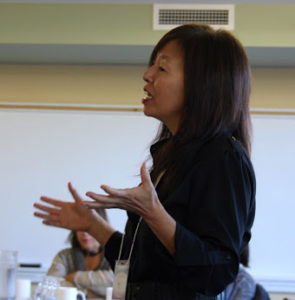 1) Transformative Justice and Restorative Justice: Gender-Based Violence and Alternative Visions of Justice in the United States.

2) Defund the Police: Moving Towards an Anti-Carceral Social Work.

3) Anti-Carceral Feminism: The Contradictions of Progress and the Possibilities of Counter-Hegemonic Struggle.

4) The Carceral Creep: Gender-Based Violence, Race and the Expansion of the Punitive State, 1973-1983.

5) From Carceral Feminism to Transformative Justice: Women of Color Feminism and Alternatives to Incarceration.

6) VAWA @ 20: The Mainstreaming of the Criminalization Critique: Reflections on VAWA 20 Years Later.

7) Challenging the Pursuit of Criminalisation in an Era of Mass Incarceration: The Limitations of Social Responses to Domestic Violence in the U.S.

8) Moving Beyond Critique: Creative Interventions and Reconstructions of Community Accountability.

10) The Community Engagement Continuum: Outreach, Mobilization, Organizing, and Accountability to Address Violence Against Women in the Asian and Pacific Islander Communities.

The Modern Roots of Transformative Justice. Video. Barnard Center for Research on Women. 2020.

What Does Justice Look Like for Survivors. Video. Barnard Center for Research on Women. 2020.

Transformative Justice in the Era of #DefundPolice. Conversation with Shira Hassan and Mimi Kim. Barnard Center for Research on Women. October 21, 2020.